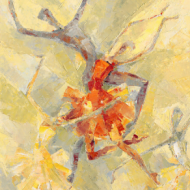 Paola’s unique style reveals influences of early Modernist traditions, blending abstraction with figuration to depict lyrical, yet dynamic scenes. Inspired by her personal experiences, her art conjures contemplation and focus on the human condition.
Born in Bulgaria, Paola was encouraged to pursue an artistic career from an early age. Her life path has led her through different countries and continents. Today Paola lives in South London and is a mother of two young kids. She balances her personal life and work in the studio with her work as a tutor at the Dulwich Art Group, where she teaches The Elements of Drawing - A Foundation in visual art after Ruskin and an Introduction to Oil Painting Course.

2010 Ballet Gala, Britten Theatre, Royal College of Music, London – 07.11. 2010
Ballet Gala in aid of the Honeypot charity, featuring an art exhibition of the Dancers Series and performances by dancers from the Royal Ballet, Ballet Black, Ballet Riviera, English National Ballet and independent dancers, incl. a special appearance from violinist Bradley Creswick who will be performing with the ballerina Antonia Franceschi. The exhibition featured 3 new paintings based on performances of the participating dancers. Posed: Celisa Diuana from the Royal Ballet and Sarah Kundi from Ballet Black. In the audience were Dame Vivienne Westwood, Clemency Burton-Hill, Monica Mason & Maina Gielgud.

2008 Ballet exhibition – Alpha Art Gallery, Varna, Bulgaria
together with the sculptor Ivan Minekov and Svetlin Nenov.
The exhibition was part of the official program of the International Ballet Competition – Varna 2008, the oldest ballet competition in the world. The competition which originated in the Bulgarian coastal city in 1964 currently takes place in Jackson and New York (USA), Varna (Bulgaria), Helsinki (Finland) and Shanghai (China).