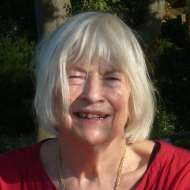 Lynnette Hemmant is a highly experienced painter. Her work has featured in numerous shared and solo exhibitions. She paints gardens on commission and her own – obsessively.

Lynette Hemmant spent her childhood in South Wales and Australia, eventually going to St Martin’s School of Art in London shortly before her sixteenth birthday.

Until 1979 she combined freelance book illustration with occasional portrait or other commissions. She featured in Best Children’s Books of the Year listings, and her work was used for TV story-telling and schools programmes in the UK and elsewhere. She worked for numerous publishers in the UK and USA (including the children’s magazine Cricket, for which she did several covers, and its sister publications), but latterly mostly for the Heinemann Group. Books included classics like Charles Dickens’s A Christmas Carol, Jane Austen’s Pride and Prejudice, as well as modern authors.

She had her first solo painting show of paintings  (1979) in Bellagio, on Lake Como, Italy. After which, she restricted illustration to work outside the book market. Commissions included a Reader’s Digest cover, a set of postage stamps and, in 1982, a commission from the Unicover Corporation of Wyoming to paint the twelve months of the year in the English countryside, for a set of collectors’ plates.

Since 1989 commissions have included two large (approximately 4ft x 7ft) paintings for an eighteenth century house in London, and drawings, subsequently engraved on glass, for a 10ft x 6ft model theatre in the Queen’s House in Greenwich, London.

From 1984, paintings done in England and Italy have been shown in shared and solo exhibitions in London (including the ROI) and the South-Eastern counties of the UK.  She has sold work in galleries in the UK, Australia, USA and Italy, and her work is in private collections throughout the world.

Lynette Hemmant has been interviewed and her work photographed for Country Homes and Interiors.  There are further magazine articles in, among others, The English Garden, 25 Beautiful Gardens and, in the USA, The Garden Shed.

She was a featured artist in Windsor & Newton/Rotovision’s book on landscape painting. In 1995, her demonstration paintings for the partwork, The Art of Drawing and Painting, were published by Eagle Moss.

In recent years she has concentrated on painting the garden through the spring, summer and autumn, when the weather has allowed.  Still life and imaginative painting take up the colder months.

In the spring of 2013, she was asked to address students at Birmingham School of Art and was created an International Research Fellow of the Centre for Fine Art Research of Birmingham University.  She has work in the London Bridge Hotel 2020 show.

She accepts commissions, and welcomes visitors to her studio, which is just three miles south of the centre of London at 35 Camberwell Grove, London SE5 8JA  Tel: (020) 7703 6186

She can also be found on Wikipedia etc.