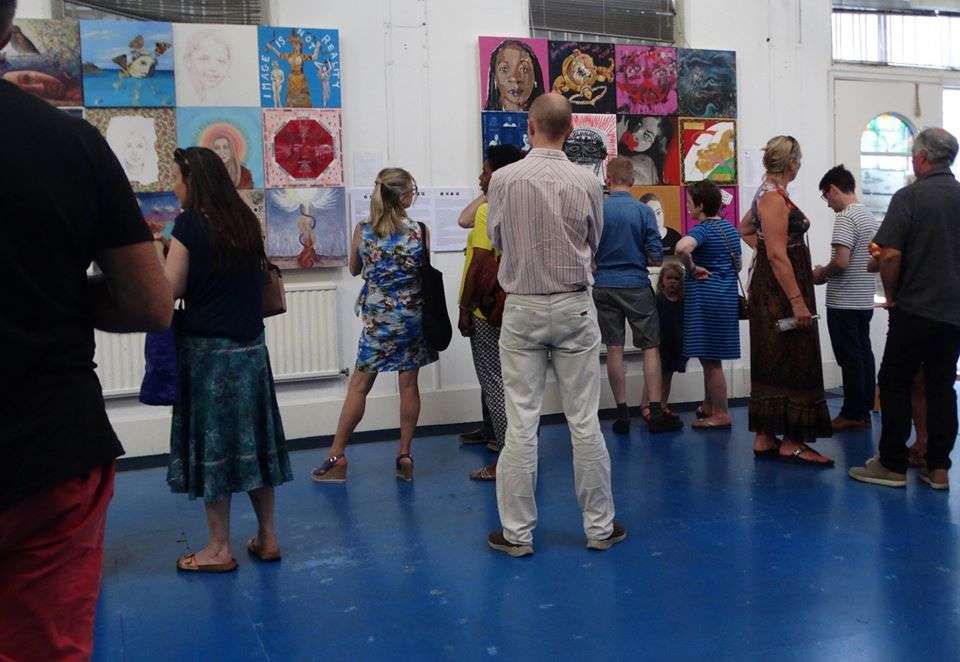 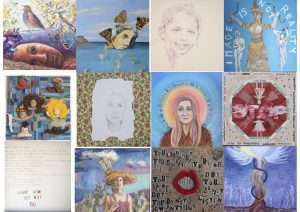 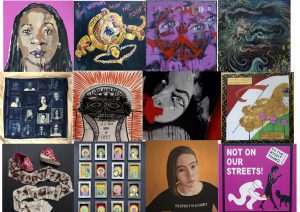 The two billboards: From left:  ‘When the Goddess Speaks’ and “I Am Woman Hear Me Roar’.

Silence Is Over, the first Exhibition in the HEO+3 trilogy, was shown at the Portico Gallery in June 2018. Twenty SLWArtists took part in the exhibition that was curated by Claire Dorey, Valerie Lambert and Selena Steele. We took the exhibition to the Portico because owner John Price was very supportive of the project. The Portico Gallery is a not for profit community gallery. The team are dedicated to art for all and the belief that society cannot exist without it

Invite to Silence Is Over

Never afraid to tackle difficult subjects, over 20 female artists had their say on a blank canvas on the subject of coercive control and sexual abuse. The canvases were assembled into two billboards to create a wall of unity. Traditionally used for advertising, often objectifying women, the billboards served as a reclaimed space where the female voice could be heard.

At the time of the exhibition the ‘Weinstein’ ripple effect and the #Me Too movement were gaining momentum, raising awareness and encouraging open conversation on the subject of abuse, a practice that can often be hidden within plain sight. The idea for using billboards referenced SaveArtSpace: The Future Is Female, The Guerrilla Girls and themes explored in the film Three Billboards Outside Ebbing Missouri. The artists who took part offered insights from diverse professional back grounds and were united in the belief that engaging with the subject will help to create a healthier society.

The aim of  Silence Is Over was to raise awareness and encourage open conversation on the subjects of violence and abuse, with the belief that doing so can create a healthier society, and was not about outing predators.

The private View was both an Exhibition and an Event. The Rye Poets performed hard hitting and poignant poems about abuse which ‘silenced’ and moved the audience. DJ Ben Smith played a wonderfully witty playlist of female anthems and local hero, acoustic guitarist Max Warner and jazz singer Talibah Rivers performed two sets of moody and moving tunes.

At the Private View

The artists were asked to write a statement to accompany their artwork and these were printed and displayed on boards as part of the exhibition. The statements were an important and integral part of the exhibition and represented many viewpoints upon the subject of co-ercive control and sexual abuse,. They were very moving, highly evocative and quite emotional to read. Viewers were visibly affected by what they read.

In the following posts we will publish the canvases and statements from each artist who took part the exhibition. We’ll also be show casing other contributors including poets, musicians, DJ’s and film makers who helped turn the exhibition into an event.