HEO+3 Silence Is Over Artists Statements 7-9 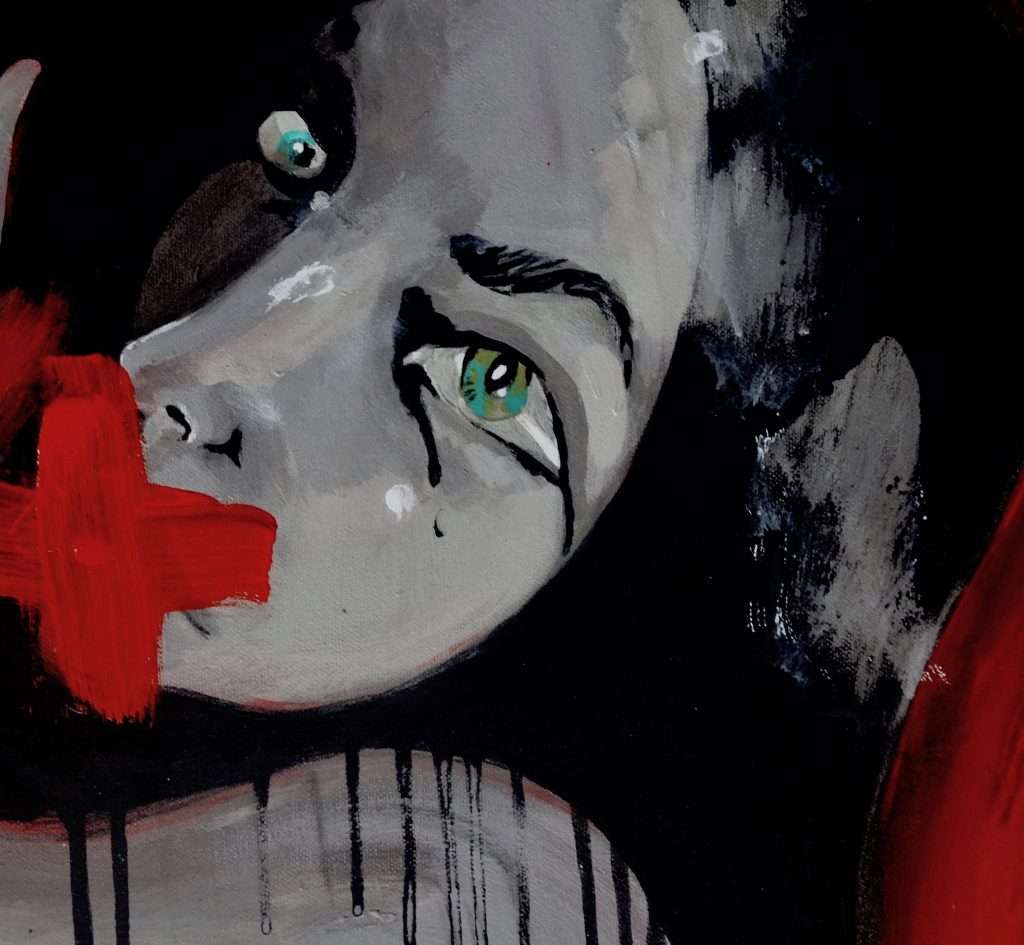 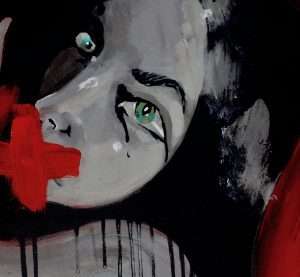 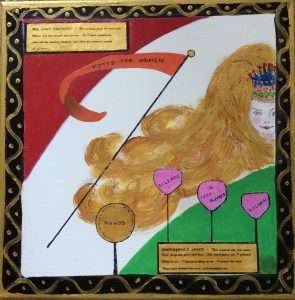 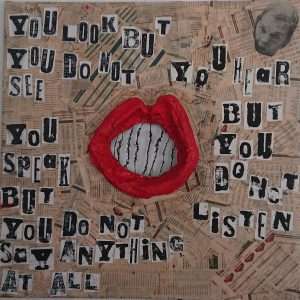 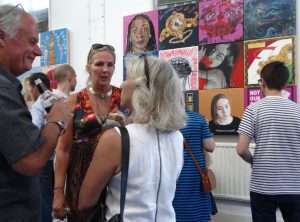 At the Private View: Photographer Trevor Richards with Cathy and Alison Garside

CLAIRE DOREY, Silenced, Acrylic, £200
This painting is about the silence that abusers and predators rely on. They know that their victims are vulnerable, traumatised and scared, and that they face a difficult battle for justice when society is judgemental and has a victim blaming mentality. Predators are adept at grooming their victims, often swapping information and tips about how to do it. This is clearly unacceptable. Opening the conversation, through art, could help to raise awareness. We need to stop victim blaming culture and put the shame squarely onto the predators , where it belongs

KATE REDFERN, Silence is Not Always Golden, Acrylic, £500
In my picture, I’ve tried to illustrate the two poems by Robert Browning, My Last Duchess and Porphyria’s Lover. Having studied them I saw they were pretty good examples of mid -19 century authoritarian attitudes of some men towards women.  Robert Browning possibly wrote these poems as a social critique  on the times, and would have sympathised with the suffragists’ movement. In My Last  Duchess the Duke, from his socially superior authoritarian standpoint can easily have a wife disposed of that does not suit him, and continue to find another that does, while casually talking about the portrait likeness of his previous wife. In Porphyria’s Lover, , the lovely girl, who worships this man but whose love is a social / sexual catastrophe, is casually strangled by her lover with her own hair, he hopes, without pain, and then propped up, eyes opened  to spend the night with him!
Possibly two rather extreme examples of mid -19 century authoritarianism perhaps, but an abrupt reminder of the long path travelled by the suffragists.  Which is why I thought it an appropriate subject for this exhibition. In the painting the colour of red white and green were the colours used by the suffragists in their campaign for Votes  for Women and NUWSS stands for their union the National Union of  Women’s Suffrage Societies (1896-1918).

KAREN J SMITH, Absence of Voice and Empowerment, Mixed media, £200
I am a self taught artist who works in a semi-autobiographical way. I have deliberately used the Financial Times as a symbol of male dominance in Finance and Business. Each statement has been printed like a ransom note; they are indicative of inequality within society. The mouth is unable to speak as it is wired up – denied of a voice. I hope the piece is bold and challenges the viewer to consider how to see, listen and talk with respect towards the individual whether male or female.

During the next few posts we will be featuring the artwork and statements from artists participating in Silence Is Over in June 2018 at the Portico Gallery. Over 20 female artists had their say on a blank canvas on the subject of coercive control and sexual abuse. The canvases were assembled into two billboards to create a wall of unity. Traditionally used for advertising, often objectifying women, the billboards served as a reclaimed space where the female voice could be heard.

Art is shown in the order they were displayed on the billboards. The statements were an integral part of the exhibition.