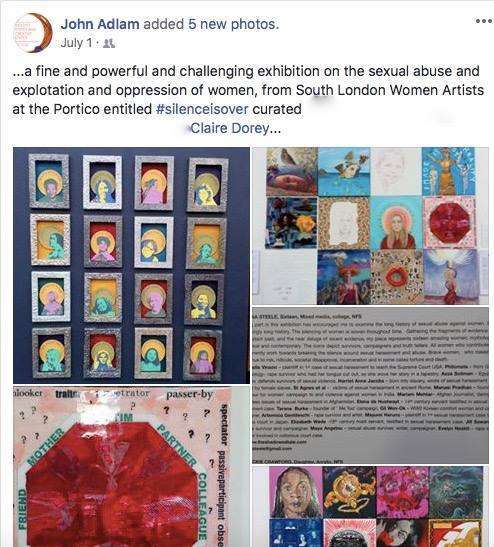 Its always nice to get feedback so when John Adlam wrote a post on Facebook about Silence Is Over we were really flattered. Below is a screen grab in which he writes….a fine and powerful and challenging exhibition on the sexual abuse and exploitation and oppression of women from South London Women Artists at the Portico #Silenceisover. 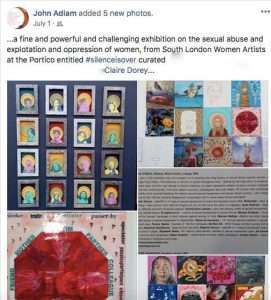 John Adlam is a Consultant Psychotherapist and Editor of the book Violent States and Creative States (2 volume set): From the Global to the Individual. (2018).

We were extremely pleased to receive such positive recognition for the work undertaken by individual artists taking part in the SLWArtists group project [Silence Is Over] and were appreciative that interest was shown in the way the subjects of coercive control and sexual abuse were explored by South London Women Artists from such varied view points and with very individual interpretations. A fortuitous coincidence since Silence Is Over coincided with the launch of  the book Violent States and Creative States. 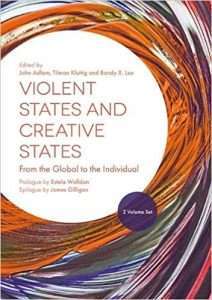 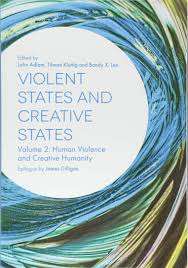 I was keen to get hold of a copy because as an artist, who had just c0-curated an exhibition to raise awareness of violence towards women, to coincide with the 100 year Anniversary of Votes For Women, I’d done a lot of research into the effects of violence upon the individual and research into what it means to be on the receiving end of violence, but not about violence per se. When I asked myself, ‘What is violence?’ the question loomed like an abstraction, so I was keen to read Violent States and Creative States to get a professional insight into a subject I had only ‘touched upon’ intuitively.

Violent States and Creative States puts “behavioural, structural and ecological’ violence under the lens of Forensic Psychotherapy, in all its, monster under the bed, psychotic, unspeakable, controlling, calculated, patriarchal, inexcusably justified, exploitative, neglectful, inward turning and self harming, gritty detail.

When I had finished reading Violent States Creative States John suggested I write a review. You can read that review here.

The last chapter on Ex Voto in Mexican Art, written by Professor Wayne Martin, was particularly appealing and would make a brilliant subject for another exhibition and one that flowed on naturally from the subjects explored In Silence Is Over as it offers a victim a form of creative, existentialist, therapeutic and spiritual healing.

Ex Voto Violence and Healing was curated by Claire Dorey, Maria Beddoes, Selena Steele and Jackie Crawford. We will feature the exhibition as well as art from individual artists in the next few posts.

Ex Voto Violence and Healing at Upstairs at the Ritzy

So what is  Ex Voto? Professor Wayne Martin who wrote the chapter on Ex Voto in Mexican painting says:

“An ex voto retablo (or simply ex voto) is a distinctively Mexican form of religious folk art. An ex voto is small (roughly the size of an A4 sheet of paper) made of readily available materials (characteristically oil on tin), often painted in a ‘naive’ style, and inexpensive. It is a form of art as- sociated specifically with shrines and sites of miracles. The term ex voto is a truncation of ex voto suscepto – from vow made. The term captures a crucial element of the practice, that it is a work of art produced in fulfilment of an earlier promise made – specifically a promise made to a saint. A typical ex voto includes an inscription in which the vow is recounted, together with one or more images representing either the moment of trauma when the vow was undertaken, or the subsequent veneration in which the victim of the trauma expresses gratitude for a miraculous intervention – or both. Violence (whether feared or actual) is a common theme in ex voto paint- ings, which portray (inter alia) executions, lynchings and assaults. The form has recently been used to explore violence associated with Mexican drug trafficking”

“There is what I will refer to as a confessional moment built in to the production of the work – a moment in which the pilgrim articulates and externalises the trauma narrative.” – Wayne Martin (2018)

Click this link for a little more information on the art form of  Ex Voto  in other cultures.

In the next post we’ll be discussing how the exhibition, Ex Voto Violence and Healing developed. (Both John and Wayne spoke at the private view.)

In the meantime heres a little more information on Violent States and Creative States:

Other research often stops short at examining the causes and risk factors for violence, without considering the opposite states that may not only mitigate, but allow for a different unfolding of individual and societal evolution. As a potential antidote to violence, the authors prescribe an un- derstanding of these ‘creative states’ with their psychological origins, and their importance in hu- man behaviour and meaning-seeking.

Violent States and Creative States From the Global to the Individual is edited by John Adlam, Tilman Kluttig and Bandy X Lee and published by Jessica Kingsley Publishers (2018) . John Adlam is a Consultant Psychotherapist and an independent researcher. The chapter, Violent States and Existential -Therapeutic Work in Mexican Ex Voto Painting, was written by Wayne Martin, Professor of Philosophy at the School of Philosophy and Art History at the University of Essex, and Director of the Essex Autonomy Project.