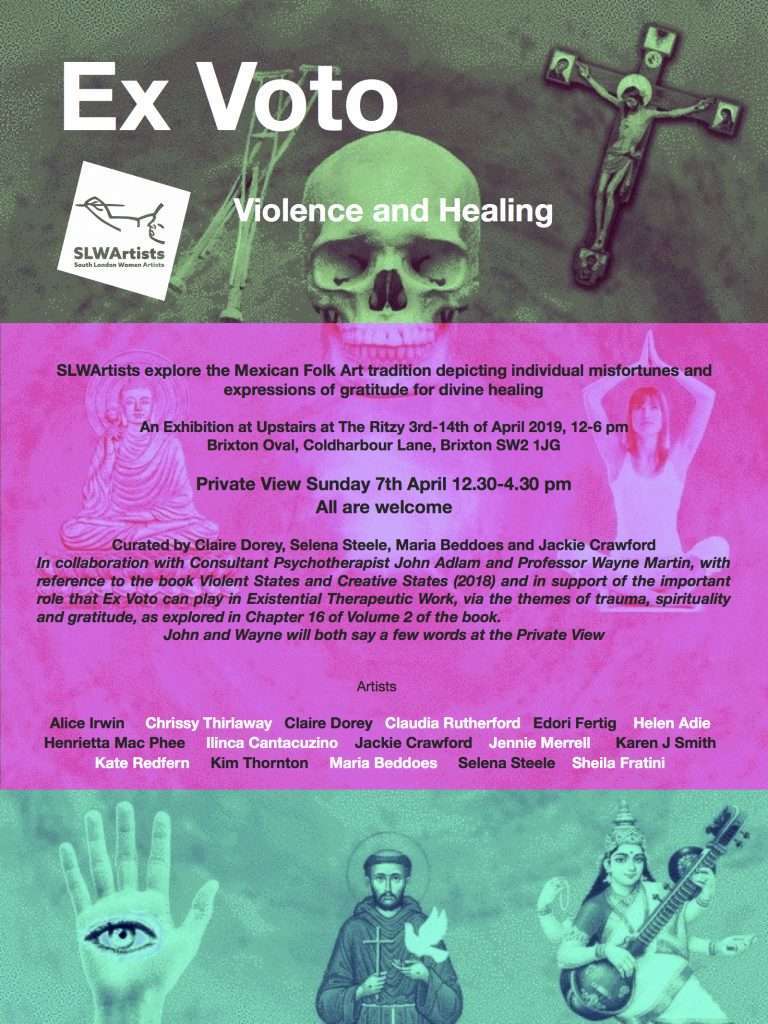 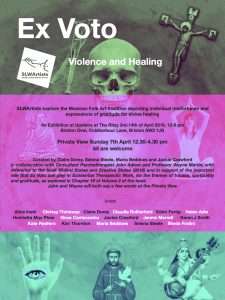 Ex Voto Violence and Healing, curated by Claire Dorey, Selena Steele, Maria Beddoes and Jackie Crawford was the second exhibition in the HEO trilogy of exhibitions, following on from Silence Is Over.  It was shown at Upstairs at The Ritzy for two weeks in April 2019. We chose Upstairs at the Ritzy because it is an intimate space, at the heart of the community in central Brixton and has a foot fall of a local, creative and musically minded crowd, due to the many events that take place there. 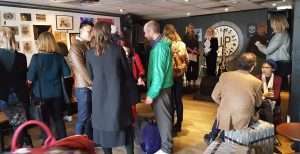 At the Private View: Maria and Claire on stage

The exhibition was in collaboration with Consultant Psychotherapist John Adlam and Professor Wayne Martin, with reference to the book Violent States and Creative States (2018) and in support of the important role that Ex Voto can play in Existential Therapeutic Work, via the themes of trauma, spirituality and gratitude, as explored in Chapter 16 of Volume 2 of the book.

At the Private View: John Adlam chats to Chrissy Thirlaway

In the previous post we have discussed how the exhibition came about and have also looked at the book Violent States and Creative States in more detail and also looked at chapter 16, written by Professor Wayne Martin that influenced the exhibition, so do refer back to that post for more information.

Having previously curated an exhibition, Silence is Over, with the objective of raising awareness of co-erceive control and sexual abuse the curators felt that a follow up exhibition that offers a victim one creative path out of suffering would be valid, especially as we believe that to create is to access divine energy and transformations of a profound nature can happen.

In our exhibition, Ex Voto Violence and Healing, artists were asked to create pieces of art that followed the traditional Mexican Ex Voto formula, as an existential therapeutic art form, where a trauma is depicted on canvas, paper or tin, together with an image of a saint, often with a prayer or expression of gratitude. In Mexican Ex Voto artists are often commissioned to do the artwork on behalf of the traumatised adding a confessional aspect to the healing process ie another cathartic layer in the form of talking therapy and the action ‘giving’ the problem away. We opened up the brief to include any spiritual or healing practice that were personal to the artist, such as music, yoga, dancing and more. The act of giving a trauma space and recognition and committing it to ‘paper’, ie getting it out, rather than bottling it up, is a cathartic and healing practice as well as an existential one and we feel it has the possibility to benefit most people, whether they are artists or not, since art is a great tool for making inner journeys and exploring the psyche.

The acclaimed Mexican Painter Frida Kahlo was a fan of Ex Voto and is believed to be a collector of Mexican Ex Voto Art. Chapter 16 of Violent States and Creative opens with a striking self portrait of Kahlo sitting, in an empty room, upon Van Gogh’s chair, wearing Rivera’s outsized suit, wielding a pair of scissors, her, once long, hair strewn upon the floor. In this one image Kahlo has become, a much cherished heroine, championing the success of self exploration and the transformative effect of artistic solutions that can heal the effects of violence.

Its a powerful image of a women taking control in the face of trauma, as well as committing an act of violence upon the self. As with the female, baroque painter, Artemisia Gentileschi, Kahlo appears to have owned, transcended and healed from trauma by committing her brutal responses to her husband’s infidelity to canvas. Kahlo may have been able to subconsciously navigate trauma, using the creatively structural tradition of Mexican Ex Voto Art, which, the author [Professor Wayne Martin] describes, as a form of ‘existential therapy’ where, “the pilgrim commissions the ex voto from one of the local painters, a transaction that inevitably involves the telling of the intensely personal and traumatic story, a confessional moment, in which the pilgrim articulates and externalises the trauma narrative.”

At the private view both John and Wayne gave engaging speeches about the book and the chapter on Ex Voto, creating an academic backdrop to the art work. Local musician Max Warner teamed up with Simon Stalley to play acoustic guitar and create a soothing backdrop for this buoyant event.

In the next few posts we will look at the individual art and statements from the artists taking part.

Written by Claire Dorey. From left: Artwork for the poster by Maria Beddoes. Setting up the exhibition: Top: Curators from left: Selena Steele, Maria Beddoes, Claire Dorey. Next: Up a  ladder; Simon Stalley. HEO (pron) Anglo Saxon word for “SHE” We are really pleased that the Weekender has given us...

Debating current political and social issues - how can art evoke change? Politics, war and activisim. Join the circle, take a seat and enjoy the evening with a welcome drink. Wednesday 29 January 2020 7 - 8.30 pm RSVP office@acflondon.org Please join us at the Pillow Talk Literary Salon where ideas and...

Images: Kim Thornton. Written by Claire Dorey This is the last post looking at the individual art and statements from the artists taking part in Ex Voto Violence in Healing and the individual ways that the artists interpreted the brief. Artists work is displayed in alphabetical order. The following artists...