Claudia Rutherford – ‘Self portrait with depression’ 40x30cm, Oil on board, 39x29cm, NFS, southlondonwomenartists/claudiarutherford
I wanted to capture honestly the red, swollen, congested face of depression; a far cry from the usual romanticised images of pretty, wistful girls on the web, which trivialise a serious illness.

Claire Dorey – Bank of Destruction, Digital print, 20x45cm, £100, southlondonwomenartists/clairedorey
Legend says that St Agnes was gang raped, beheaded and became a martyr, aged 13, because she refused to marry. In my picture she stands up to a partiacrchal society, where rampant forms of toxic capitalism, consumption, exploitation and control, destroy the entire world. 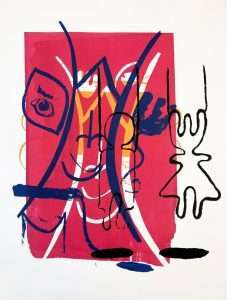 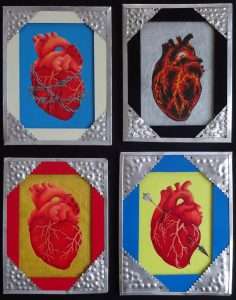 Alice Irwin – Kinda Same, Screenprint on paper, 45x30cm, £250, aliceirwin.com, @alice.irwin_
The playground is an important space and an integral theme in Irwins practice, where she looks at different memories and social skills, imagination and psychological trauma felt in these sites of activity and social interaction.

Ex Voto Violence and Healing, curated by Claire Dorey, Selena Steele, Maria Beddoes and Jackie Crawford was the second exhibition in the HEO trilogy of exhibitions, following on from Silence Is Over. It was shown at Upstairs at The Ritzy, for two weeks in April 2019.

The exhibition was in collaboration with consultant psychotherapist John Adlam and Professor Wayne Martin with reference to the book Violent States and Creative States (2018) and in suppport of the important role that Ex Voto can play in Existential Therapeutic Work via the themes of trauma, spirituality and gratitude, as exploerd in Chapter 16 of Volume 2 of the book. For more information on Violent States and Creative States and on Ex Voto do refer to previous posts if you haven’t already seen them. 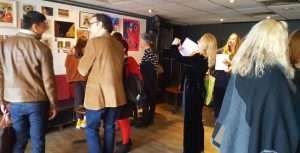